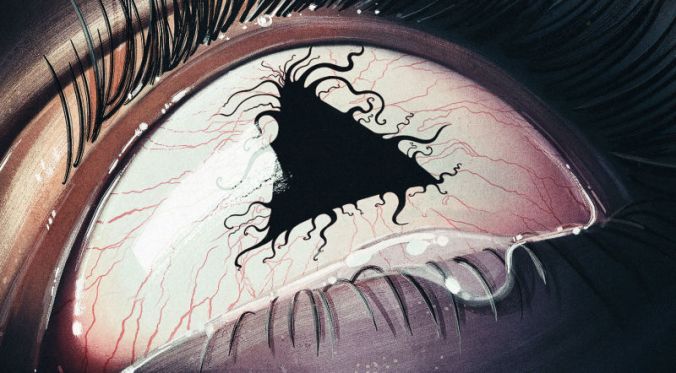 When I first saw the incredible trailer and luscious promotional artwork for Jeremy Gillespie and Steven Kostanski’s 80’s horror throwback The Void, my expectations were set dangerously high. And why shouldn’t they have been? Not only did it look fantastic, but the past few years have been inundated with some astonishing and original horror films – The Witch, The Babadook, It Follows, The Invitation, Get Out, Bone Tomahawk – and this trend doesn’t look like it’s going to dry up anytime soon. Sure, there are some stinkers out there too, but there was no reason to believe that The Void might fall in with that crowd.

I won’t go into any detail about the plot, since there really isn’t that much of one anyway, beyond the basic scenario of a group of characters trapped in a hospital, assailed from outside by white-robed cultists and from inside by gelatinous horrors and a madman with a propensity for self-mutilation.

The Void isn’t exactly a bad film, but for me the disappointment started to soak through as its 90-minute run time dragged on. Its most glaring problem is that it just isn’t very original. With its aesthetic and its – admittedly quite good – practical creature effects, it wears its influences on its sleeve. The problem with this is that I was regularly reminded of all the far superior horror films it’s clearly been inspired by: John Carpenter’s The Thing and Prince of Darkness, Event Horizon, The Beyond.

The thing with homage-style films is that they can be great fun even if they don’t end up subverting the thing they’re emulating. Take Adam Wingard’s 2014 film The Guest, a brilliant 80’s style retro action thriller/slasher. It works so well not simply because it has a great script and is well made, but because it’s fun. Unfortunately, fun isn’t a word I’d use to describe The Void.

It has all the components of a potentially mind-blowing horror film – murderous cults, gelatinous creatures, body horror, monstrous pregnancies, alternate dimensions – but it never really does anything interesting with them, and it never seems to work on its own merits. Everything here feels too subdued, like it’s too afraid to be its own film. It’s not as weird as it could be, not as violent, not as moving or atmospheric or even cosmic. Again, the practical effects are admirable, but the creature design is dull, the scene set-up pedestrian, and the constantly flickering lights infuriating. None of the elements seemed to come together for me, or not enough to make a coherent, flowing story. The script is severely lacking in both direction and three-dimensional characters, and the acting is wooden at best. The human villain is a one-note nutjob with a flimsy, bordering-on-ludicrous motivation that only gels with his actions on the most superficial “let’s-try-this-because-it’s-gross” level. Even the score is barely noticeable, and that was the one area they at least could have let rip with the Carpenter worship.

I think the problem here is that the directors seem like they’re trying to build a mythology for their film, with the triangle motifs and the multidimensional elements – the hallucinatory shots of desolate landscapes, galaxies and pulsing flesh are beautiful, and by far the best part of The Void – but they end up cramming in a whole bunch of things that don’t necessarily work in and of themselves. Internal logic is nowhere to be found. There’s no rhythm or harmony to the story or its characters, which are forced to co-exist in a world that has a lot of potential, but ultimately isn’t very believable or engaging.

It’s possible I’m being too harsh on this because I was so excited to see it, and by the look of a lot of reviews it’s been receiving, I expect most people to disagree with me, but with the horror genre experiencing a renaissance of gripping, original work that isn’t just limited to film, this kind of messy pastiche of beloved influences just isn’t good enough.

By the end of The Void, it became disappointingly apparent that this is one of those cases where the promotional material ends up being far better than the film itself.