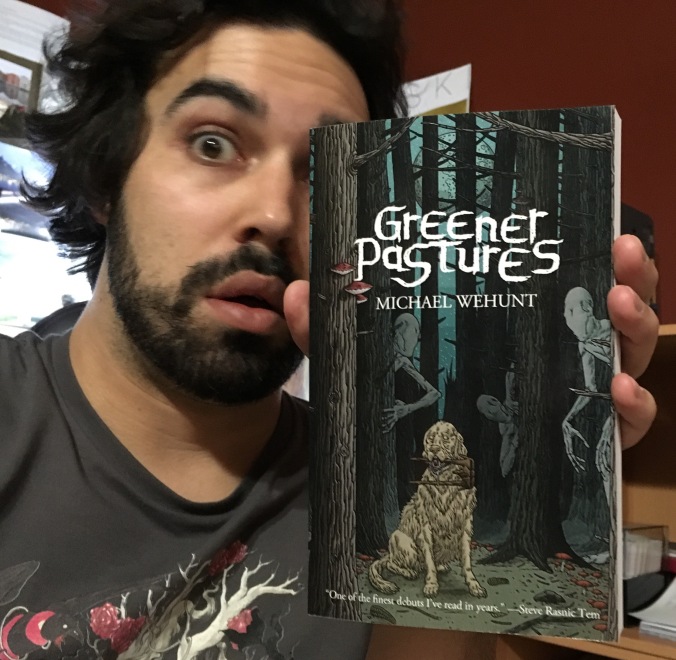 A poorly executed reenactment of the terror I felt while reading this. Damn good cover though!

Last night by 3am I was feeling all breathless and itchy, a sense of melancholy soaking through me as I lay in bed, kind of awestruck and immobile and not really wanting to turn out the light.

But I wasn’t doing what you think I was doing. (Although I’m not sure how awestruck that activity leaves a person.) Actually, I’d just finished reading Michael Wehunt’s delightful little debut collection of weird stories, Greener Pastures (which you can and should purchase from Shock Totem here).

First though, I need to take a moment to praise somebody other than the author. Just look at this book’s cover. It drips atmosphere. I’ve been a fan of the enormously talented Michael Bukowski since I discovered yog-blogsoth, the blog where he renders every literary monstrosity in his painstaking visual style. He’s already cleaned out Lovecraft’s oeuvre and is now working his way through every other horror writer in existence. The point is, you should definitely judge this book by its cover, because both are incredible.

But back to the writer. I was chilled by these stories. I was dumbstruck and harried and torn apart, not only by the beautifully realised supernatural elements – those dark squirming wonders either creeping out from the words’ edges or baring themselves without shame to the reader – but also by the people thrown into these situations and encounters. This is where the collection really shines. Wehunt’s character work is unrivalled, and he manages to pull off depths of human flaw and pain and wanting in these short stories that many novel-length works don’t come close to achieving. Each story is anchored by some sort of failed relationship or moment of heartbreak or dilemma. They may dream, but most of the people here are not happy, or at least don’t end up so. That’s less a spoiler and more a state of equilibrium for the worlds Wehunt conjures. Or rather, the world over which he paints the weird with masterful strokes. And what a variety of weirdness there is. These stories explore cosmic horror, Christian imagery and vampires – among much else – from angles I never knew were possible.

And this is without mentioning the prose. Wehunt’s words are a quiet creeping poetry, and evocative, in a way, of the darkest of folktales. I say poetry deliberately because there’s a kind of lyrical economy in Wehunt’s use of language that evokes the best kind of poem. It’s all beautiful and haunting and pierces deep, but every word is deliciously readable and, more often than not, relatable in some way. It’s this masterful, controlled writing that really draws out the gruesome otherworldly beauty in which every story and every moment is saturated.

Though not all strictly horror-oriented, a few of the works here left my skin crawling with a terror that the written word hasn’t evoked in me since Laird Barron’s best work. “October Film Haunt: Under the House” does a magnificent job of transposing the structure of a found footage film into the written form, merging horror tropes with metafiction in one of the collection’s scarier inclusions. The mythos built in this story seems connected to one earlier in the volume, “Onanon,” at least in some aesthetic way. The latter is another incredibly clever and terrifying play on the nature of language and stories.

Other stories tackle a beautiful breed of body horror, child abuse, ghosts, parallel universes and the things that lurk at the edges of our sight. All of them still crowd my head. The title story is a short one but drowns you in its sense of lightlessness and dread; I read this outside on a sunny day, but in my immersion noticed none of my surroundings.

And that’s exactly what I want from everything I read: to forget, for however long, that the world around me exists. I guess it’s just a bonus if I’m also scared to turn out all the lights.

Basically, I have nothing bad to say about Greener Pastures, except that I’ve finished it now and will never again have that wonderful first experience of reading it. But you can, if you haven’t. So hurry up and buy it, before the lights dim or the mountain starts bleeding or feathers begin to sprout from your skin.